Very beautiful, alpine via ferrata on the south side of the Köllenspitze - the trail has class and could become one of the really big iron trails in the region! Not only the difficulties, which with passages up to difficulty level D are more in the upper range, distinguish this Ferrata. The mix of a longer ascent, great, difficult sport via ferrata and alpine tricky descent makes for the perfect adventure via ferrata day. On the summit you have the rugged peaks of the Alps in the south as well as the beautiful lakes near Neuschwanstein in the north in view. But beware, because of the alpine descent, the climb should only be done by experienced via ferrata climbers at the moment - but perhaps those responsible will take the edge off the descent.

This ferrata is not only characterised by the difficulties, which are more in the upper range with passages up to difficulty level D, but also by its scenic attractions. The difficulties are in the lower part and on the summit wall.

Attention: the descent is alpine ! - Climbs up to 1, partly exposed and brittle. Dangerous in snow and wet conditions (the snow lasts quite long on the north side in spring, information about the conditions at the Gimpelhaus or the Tannheimer Hütte).

Long via ferrata tour which should only be done in stable weather.

From the car park to the Gimpelhaus (1659 m) and from there in the direction of Rote Flüh until you turn right after the Gimpelalpe to the Nesselwängler Scharte. Immediately before the saddle, turn right to the foot of the Köllenspitze south face (red dot markings, at the end of the scree you better put on your helmet in the rubble field).

From the summit first north on ascent tracks into a channel, then descend left (west) in the channel until you reach a steep step (rope belay; C/D). Continue down in the gully until you cross a rugged plate (1) on the left and ascend again through a small gully. Behind the edge, descend over partly steep craggy terrain (places 1-) to the Nesselwängler Scharte (2007 m). From there back to the south side and on the access path back to the valley.

In the Tannheimer Tal (which can be reached from Reutte, from Kempten/Oberjoch or Sonthofen) to Nesselwängle and park on the western edge of the village on the parking lot of the Gimpelhaus. Alternatively you can park at the cable car of the Gimpelhaus (both with costs).

By train to Reutte and by bus to Nesselwängle. 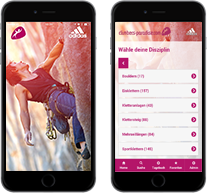